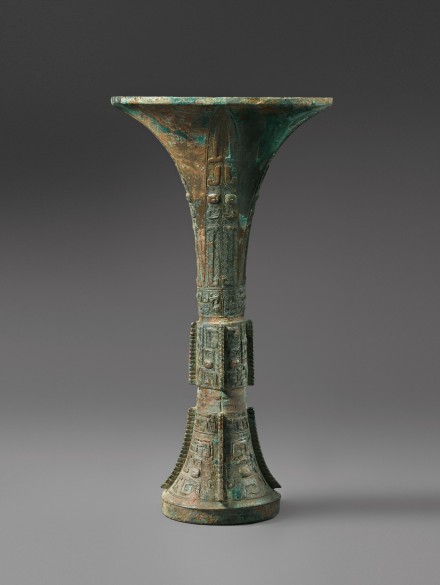 of tall slender flaring form, cast with four elongated blades rising to the trumpet mouth from a narrow band of four kui dragons with hooked beaks at the base of the neck, each blade filled with the dispersed elements of a taotie cast in shallow relief above a ground of leiwen scrolls and with matching tight linear scroll decoration on all the raised elements except the rounded oblong eyes, the kui dragons also with the same intricately cast scroll decoration and raised on a leiwen pattern ground, the central knop with a pair of taotie masks centered on and divided by notched flanges above a plain recessed band with two inset cruciform motifs, the spreading foot decorated to match the central knop with two larger taotie and notched flanges below a border of four kui dragons with ‘C’-shaped horns and long snouts, all with scroll embellishment and raised on leiwen grounds, the surface showing areas of bright malachite green encrustation over reddish cuprite corrosion, with sections of smooth silvery-gray patina inside the mouth, cast with two pictograms under the foot.

Shang dynasty gu of this classic form with similar decoration are well known from excavations at the site of the Shang capital near Anyang in Henan and comparable examples are recorded in museum and private collections around the world, but the combination of bands of two different types of kui dragons above and below the knop is rarely seen.

Comparable gu of very similar form and cast in the same style with the same decorative program but with the more typical combination of silk worms or serpents in the band around the base of the neck and kui dragons in the band around the top of the foot are in the Museum of Fine Arts, Boston, illustrated by Fontein and Wu in Unearthing China’s Past, Boston, 1973, pp. 38–39, no. 8; in the Saint Louis Art Museum, illustrated by Owyoung, Ancient Chinese Bronzes in the Saint Louis Art Museum, St. Louis, 1997, pp. 58–59, no. 8, from the J. Lionberger Davis Collection; illustrated by Karlgren in ‘New Studies in Chinese Bronzes’ in Bulletin of the Museum of Far Eastern Antiquities, Stockholm, No. 9, 1937, pl. XXII, no. 805, from the Lundgren Collection; illustrated by Brinker in Bronzen aus dem alten China, Zurich, 1975, p. 81, no. 40, from the Gross-Spühler Collection and illustrated by Thorp and Bower in Spirit and Ritual, The Morse Collection of Ancient Chinese Art, New York, 1982, p. 24, no. 8.