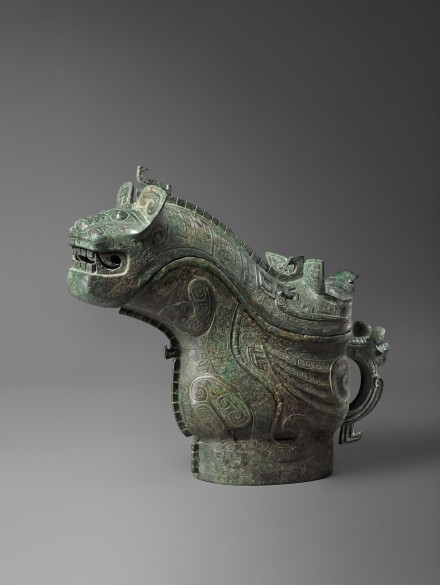 the deep boat-shaped vessel with wide, rising spout, fitted with an elongated cover ending in a stylized tiger head with ‘C’-scroll upright ears behind round bulging eyes and open jaws with blunt teeth and sharp fangs projecting beyond the end of the spout, the body of the tiger spread over both sides of the front half of the vessel, with short forelegs on either side of the neck, larger hind legs below, and a long tail ending in a tight curl on either side of the high hollow foot, the back of the cover cast with the head of an owl with hooked beak and large upright ‘C’-scroll feather-tufts behind round bulging eyes, the body of the owl forming the back of the vessel, with large wings in stepped relief swept back on either side and short legs ending in talons on the foot, the loop handle projecting at the back of the vessel, surmounted by a horned monster head above folded wings and a hooked terminal, the domed sides of the cover decorated with a pair of bodiless kui dragons cast in relief on a finely cast leiwen ground and divided by a notched flange down the center rising to a horned dragon head at the front and a hooked tail at the back, with another segmented flange bisecting the front of the vessel, flanked by intaglio kui dragons confronted beneath the lip of the spout and crested birds in intaglio on the tiger’s chest, the opposite end of the cover with a larger pair of confronted birds similarly cast below the owl’s beak, the details of the decoration all incorporated in a dense ground of varied allover fine intaglio scroll pattern, with brightly mottled malachite green patina, the center of the interior of the vessel with a pictogram.

The pictogram has been interpreted as 衛 (wei)—footprints around a sanctuary enclosing 冊 (ce)—two hands offering a book.

The same distinctive pictogram found on this gong also appears on a Shang bronze wine container (you) in the Cernuschi Museum, illustrated by Elisseeff, Bronzes archaiques chinois au Musée Cernuschi, Vol. I, Paris, 1977, p. 134, no. 48.