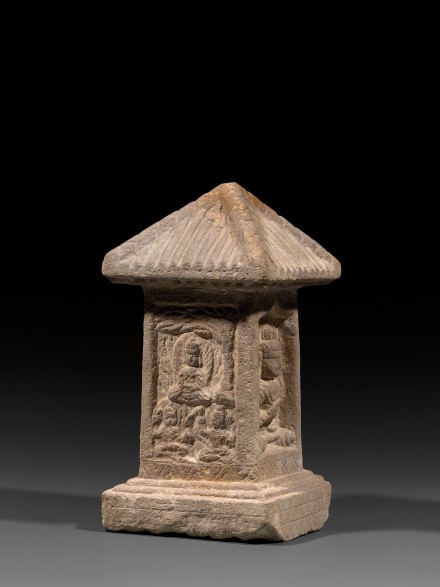 the principal side of the short quadrangular pillar carved in relief with a figure of the Buddha with right hand held open in abhaya mudra seated in a niche backed by flame motifs, between two more shallow niches on the adjacent sides, one carved in relief with the Buddha standing between two bodhisattvas below a pair of apsaras with arms outstretched holding a large lotus flower, the other niche carved in relief with the Buddha seated in meditation beneath the arching branches of a tree and with two bodhisattvas in conversation below, the reverse side of the pillar with a flat gridded panel filled with a dedicatory inscription, all surmounted by a four-sided peaked roof with ribs and ridges simulating tilework and raised on a stepped platform base incised with lines to indicate brickwork.

The carved inscription begins with a date which may be read as 景明元年七月十日 and may be translated as “tenth day, seventh month, first year [of the reign of] Jing Ming,” corresponding to A.D. 500.

Compare also the Northern Wei stone carving of a seated Buddha with very similar treatment of the drapery of the robes, illustrated by Matsubara, Chūgoku bukkyō chōkokushi kenkyū (Chinese Buddhist Sculpture: A Study Based on Bronze and Stone Statues other than Works from Cave-Temples), Tokyo, 1966, pl. 54a, with description on p. 238.