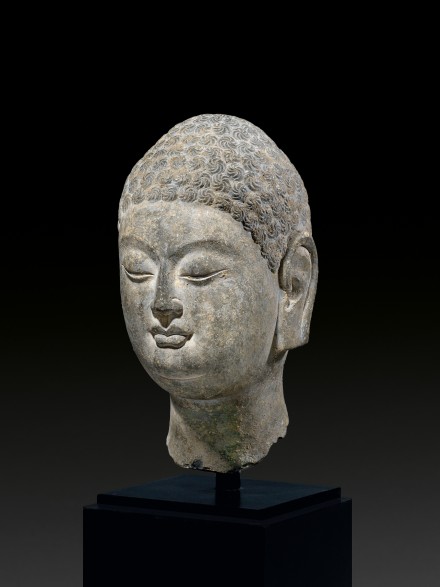 with finely carved small features showing a benevolent expression, the eyes half-closed below plain arched eyebrows joined at the ridge of the narrow aquiline nose, the small mouth with pursed lips, the rounded chin defined by a deeply carved shallow arc, the ears with long lobes now truncated, the hair carved as rows of rounded pinwheel curls rising over the domed usnisa on top of the head, the dense dark gray limestone lightly encrusted with buff-colored earth all over.

Provenance
From the Collection of Ronald W. Longsdorf, Columbus, Ohio

A similar Northern Qi head of Buddha with hair carved in the same distinctive pinwheel curls, discovered at the site of Longxing temple in Qingzhou, Shandong province in 1996 is illustrated in the catalogue of the exhibition at the National Museum of Chinese History, Masterpieces of Buddhist Statuary from Qingzhou City, Beijing, 1999, p. 126; the same head of Buddha is also illustrated by Wang et.al., eds., Qingzhou Longxingsi fojiao zaoxiang yishu (The Art of the Buddhist Statuary at Longxing Temple in Qingzhou), Jinan, 1999, no. 119.