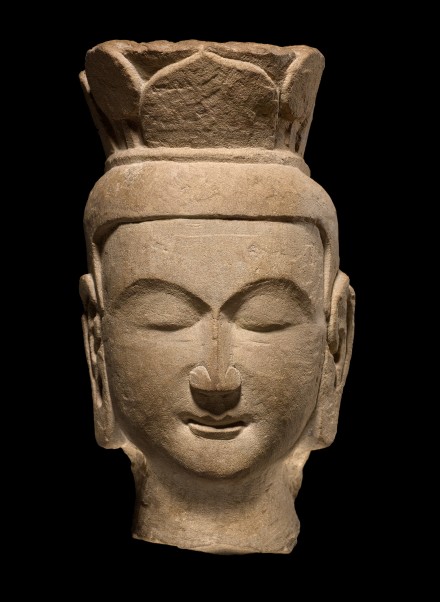 carved in three-quarter relief with simple features in a gentle introspective expression, the eyes half-closed under arched brows joined at the ridge of the small angular nose, the mouth set in a serene archaic smile, the narrow ears simply carved with elongated lobes, the plain hair defined by a shallow angle above the smooth forehead and gathered into a topknot enclosed by a diadem of simplified plain flowers and large lotus petal motifs, the dense fine-grained pale limestone with a patina of warm beige tone.

The Buddhist cave-temples in the rock cliffs at Gongxian county, Henan, approximately forty miles east of Longmen, were carved early in the 6th century to commemorate the Northern Wei emperor Xiaowen (r. 471-499) who had selected the site for the establishment of the Xixuan Temple during his reign.

A similar head of a bodhisattva from Gongxian now in the collection of the Osaka Municipal Museum of Art is illustrated in the catalogue of the special exhibition Chūgoku no sekibutsu: sōgonnaru inori (Chinese Buddhist Stone Sculpture: Veneration of the Sublime), Osaka, 1995, no. 20. The same head was previously illustrated in Rikuchō no bijutsu (Art of the Six Dynasties), Osaka, 1975, p. 24, no. 3~30, together with another similar Gongxian bodhisattva head in the collection of the Ohara Museum, no. 3~31.

Compare also the Gongxian bodhisattva figures in several museum collections: in the Kyoto National Museum, illustrated in Rikuchō no bijutsu (Art of the Six Dynasties), Osaka, 1975, p. 25, no. 3~38; in the Harvard University Art Museums, illustrated in Grenville L. Winthrop: Retrospective for a Collector, Cambridge, 1969, pp. 82-83, no. 68; in the Freer Gallery of Art, illustrated in the large format Kodansha catalogue, The Freer Gallery of Art, I China, Tokyo, 1972, pl. 74; in the Rietberg Museum, illustrated by Sirén, Chinese Sculptures in the von der Heydt Collection, Zurich, 1959, no. 17.