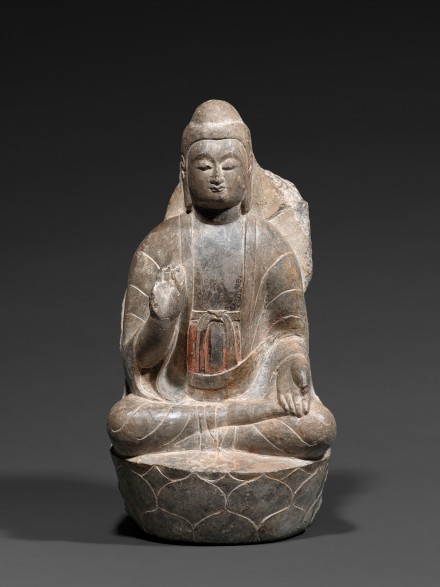 carved in three-quarter relief, shown seated with legs crossed in padmasana on a rounded lotus throne, wearing plain monastic robes draped over both shoulders and an under-robe tied with a thin girdle at the front, the face with small features showing a serene expression, the ears with long lobes, the top of the head with a large domed usnisa, the right hand raised in abhaya mudra, offering reassurance to the faithful, the left hand lowered in varada mudra, offering compassion and charity, originally the central figure of a votive group, the thick flat back and underside of the lotus throne roughly truncated, the dense gray stone with smooth mottled surface, showing remains of red and black pigment and traces of earth encrustation.

Compare also the limestone seated Buddha on a rounded lotus throne in the collection of the Tokyo National Museum, dated by inscription to the first year of Yongchang (A.D. 689) in the Tang dynasty, illustrated by Matsubara, Chūgoku bukkyō chōkokushi kenkyū (Chinese Buddhist Sculpture: a Study Based on Bronze and Stone Statues other than Works from Cave Temples), Tokyo, 1966, no. 251 (b).