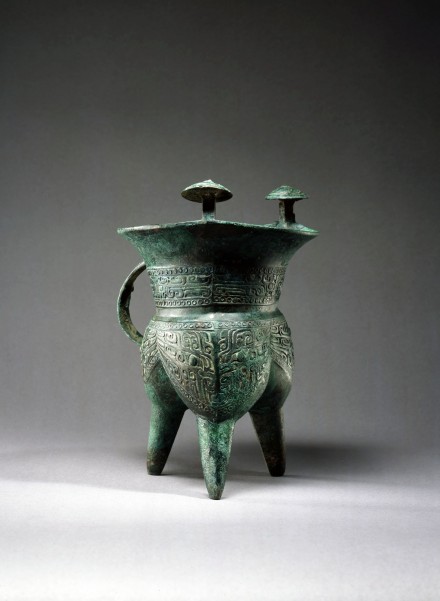 the deep body divided into three lobes, each supported on a plain tapered leg and cast in uniform flat relief with a pair of kui dragons dissolved into scroll motifs, each dragon with a raised circular eye below an arrangement of hooked scrolls which may be interpreted as a horn, with a cluster of elongated scrolls which may be interpreted as fangs in an open mouth filling the lower section, and with tapered wing-shaped scroll motifs rising behind to serve as the body and tail, each pair of kui dragons confronted on a flat band to comprise a taotie mask above each leg, the decoration framed by narrow borders of detached rings in thread relief, the wide neck cast with a frieze of dragon-scroll motifs, also framed by detached ring borders, with two eyes forming a taotie in the center of the widest side and with a single eye centering each of the two shorter bands flanking and interrupted by the loop handle of flattened form rising above one leg in an almost semi-circular arc and joined to the neck, the flaring mouth with a thicker band around the interior of the rim, as if folded over, and with a pair of squared pegs surmounted by domed finials each cast with intaglio whorl motifs around a nipple in the center, with an ancient cast-on repair to rejoin one peg at the rim, the dark metal with a thin layer of bright malachite-green patina unevenly spread around the sides and continuing over the rim, the interior with a wide area of azurite-blue patina and traces of burial earth.

A similar bronze jia discovered in 1977 at Suixian in Hubei province is illustrated in an excavation report in Wenwu 1981, No. 8, pl. 4, no. 1 and in a line drawing on p. 47, fig. 3, no. 1, with rubbings of the taotie motifs cast on the sides also on p. 47, fig. 4, nos. 1 and 2.  The author of the article describes the jia and the other bronzes found at the same site as having been produced in the period between the Erligang culture and the Anyang culture.

Compare also the larger bronze jia of similar form and closely related design in the Shanghai Museum, illustrated by Ma Chengyuan in Ancient Chinese Bronzes, Oxford, 1986, p. 92, pl. 22, described by the author as a "mature" example of the Erligang culture.