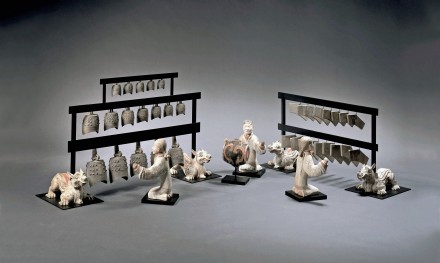 the musicians shown kneeling with hands held up as if ready to play, each wearing heavy layered robes covered with white pigment and painted with red borders, the underrobes also showing in red at the collar and cuffs, with flesh-pink pigment on the faces and hands, the hair gathered into a knotted chignon hanging loosely at the back and painted black, the feet shown tucked under and crossed over; the seventeen gray pottery “stone” chimes (qing) in graduated sizes and the seventeen gray pottery “bronze” bells including a graduated set of twelve niuzhong with simple upright suspension loops and five larger yongzhong with animal-head loops at the sides of the long shafts, the chimes and the bells now suspended from replacement wood racks each supported on uprights rising from square sockets in the backs of ancient painted pottery mythical beasts, each shown crouching on wide paws with elaborate folded wings on the shoulders, the dragon-like head with upturned snout and long pointed ears, covered with white slip and detailed in red and black pigments; the large gray pottery barrel-shaped drum (jiangu) with square sockets on opposite sides to allow for mounting by a pole through the center, moulded with lattice pattern on the concave sides of the sockets, the rounded sides of the drum elaborately decorated in red and white over a black ground with long scroll motifs which are further detailed in red with thin curling borders and multiple spiked flame-like elements embellished with touches of pale lavender and traces of chalky blue-green pigments, the drum-heads each with a red disc in the center enclosed by a wide border of white on one end and with a pale lavender-colored border on the other end; with traces of earth from burial overall.

Sets of pottery chimes and bells of this type excavated in 1979 from two Western Han tombs in Hongmiaopo, north of Xi’an, Shaanxi province, are illustrated by Gao Men in Xi’an Diqu Chutu Handai Taoqi Xuanjie (A study of selected Han pottery excavated in the Xi’an region) in Wenwu, 2002, No. 12, p. 34, figs. 3, 5 and 6.  A painted pottery mythical beast of the same model as the four present examples, with a square socket through its back, is illustrated in the same article, in Wenwu, 2002, No. 12, p. 36, fig. 12, where the author states that it was excavated from Shilipu, north of Xi’an in Shaanxi province and three other mythical beasts together with pottery chimes and pottery bells were found at the same site.

Scenes of musical performances including large drums and drummers, often as a central feature, have been preserved on several carved stone wall panels from Han tombs.  A stone slab from a tomb in Shandong, carved in relief with a large drum in the center of a magical scene of revelers and performers, inscribed with a date corresponding to A.D. 114, now in the Museum Rietberg, Zurich, is illustrated by Osvald Sirén in Chinesische Skulpturen de Sammlung Eduard von der Heydt, Zurich, 1950, no. 2, pp. 16-19, where the author proposes that the carved scene was “…intended to place on record the celebrations at the funeral of the deceased and forecast such pleasures as an earthly spirit was supposed to enjoy after abandoning its fleshly abode.”