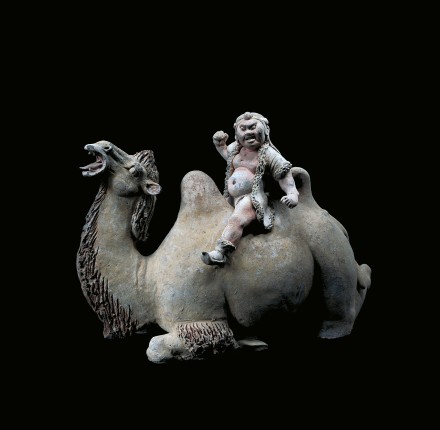 the well-modelled Bactrian camel shown with its legs folded under and head thrown back, as if about to stand up, with its mouth open in a braying attitude, showing four teeth and a curled red tongue, the long muzzle with flared nostrils and the back of the head rising to a tuft of hair above the large protruding eyes, the ears laid back above the rough mane on the back of the neck, and with more thick shaggy hair extending down the front of the neck and similar shaggy tufts at the top of the forelegs which are folded so that knobby knees protrude and the cloven hooves are laid flat under the body, the back legs also folded tightly and the long tail flicked to one side, the broad back of the camel with two large humps with heavy tops curled in opposite directions; the rider of exotic Central Asian type shown straddling the back of the camel in a vigorous pose with one leg kicked forward, the other leg kicked back and both arms held out with clenched fists, dressed in a short-sleeved fur-lined tunic and fur-lined boots with curled and pointed toes, his tunic left open at the front revealing his bare chest and pot belly, his round face with full cheeks and large nose, the eyes set in a fierce expression and the mouth open as if shouting a command to his mount, with a studded strap across his forehead and his long hair falling down his back; the buff-gray pottery covered with white slip overall and with flesh-pink pigment on the rider and ochre pigment on the camel highlighted with red on the tufts of hair, inside the mouth and on the ears, the pigments unusually well preserved and the surface showing traces of earth from burial.

Compare the similar pottery figure of a kneeling camel and foreign rider excavated in 1960 from Baoji, Shaanxi province, now in the Shaanxi Historical Museum, included in the exhibition organized by the Cultural Bureau of Shaanxi and the Hong Kong Culture and Art Foundation, and illustrated in the catalogue, Treasures of Chang'an – Capital of the Silk Road, Hong Kong, 1993, no. 61, pp. 172-173.  Compare also the similarly modelled pottery kneeling camel and rider excavated in 1956 at Xianyang, Shaanxi province, also now in the Shaanxi Historical Museum, illustrated in World of the Heavenly Khan - Treasures of the T'ang Dynasty, Taipei, 2002, p.132.

Another more simply modelled kneeling camel and rider was excavated from the tomb of princess Jinxiang (died A.D. 722) who was one of the granddaughters of the first emperor of the Tang dynasty, discovered in 1991 at Xi'an, Shaanxi province, and is illustrated in Tang Jinxiang Xianzhu Mu (The Tomb of Jinxiang Xianzhu in the Tang Dynasty), Beijing, 2002, no. 20.