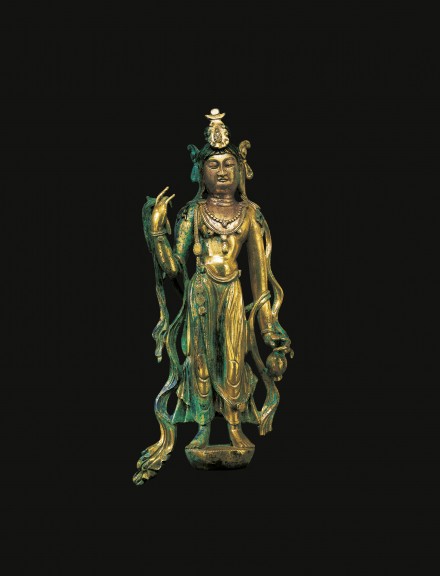 8.
A GILT-BRONZE FIGURE OF THE BODHISATTVA GUANYIN

modelled fully in the round, shown standing in tribhangha with the left leg slightly bent, wearing a long dhoti gathered around the waist and falling in graceful pleated folds over the legs, the bare torso draped in jewels, including one long beaded chain hanging down to the ankles, with left arm extended down at the side, holding a long-necked amrita bottle, the right arm holding a willow branch up to the shoulder, the face with serene features and downcast eyes, the hair pulled back and piled up in a high chignon behind a diadem centered with a figure of Amitabha Buddha on a cloud-form plaque surmounted by an emblem of the sun and crescent moon, with ribbons and knotted tresses trailing onto the shoulders and long fluttering scarves hanging loosely down and flaring out at either side of the bare feet set on a lotus-pod shaped pedestal base with beaded edge, the surface richly gilded and the gilding very well preserved, showing areas of bright malachite green and azurite blue patination from burial widely scattered over the surface.

Compare the Tang dynasty gilt-bronze bodhisattva cast in a very similar style, holding the same attributes and wearing a similar diadem including the crescent moon and sun over a seated Amitabha Buddha in the center, illustrated by Matsubara in Chūgoku Bukkyō chokokushi ron (Historical Discussion of Chinese Buddhist Sculpture), Tokyo, 1995, Vol. III, nos. 699 and 700a-b.

Compare also the Tang gilt-bronze bodhisattva in the Shanghai Museum shown standing in a similar pose but without emblems in the diadem or attributes held in the hands, published in the catalogue entitled Shanghai Museum Ancient Chinese Sculpture Gallery, Shanghai, 1996, no. 60. Another similar Tang dynasty gilt bronze standing figure of Guanyin in the collection of the Harvard University Art Museums is illustrated by Howard et. al., Chinese Sculpture, New Haven, 2006, p. 312, fig. 3.118.

8.
A GILT-BRONZE FIGURE OF THE BODHISATTVA GUANYIN