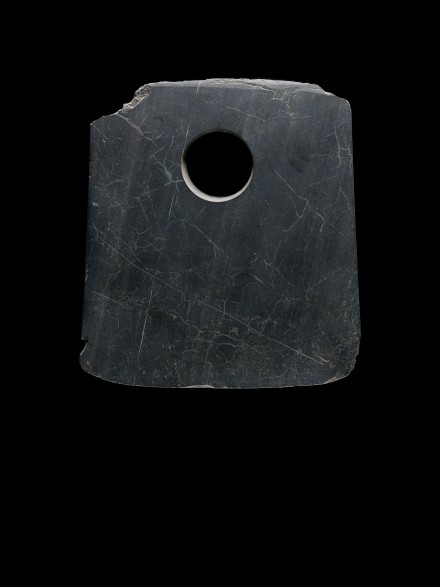 the wide flat blade with an aperture drilled from both sides and centered below the unevenly finished butt end, the sides slightly tapered, the cutting edge blunt, the dark gray stone with a widely dispersed network of pale root marks on one side of the polished surface.

A Liangzhu culture provenance is likely for this piece, but an alternative culture cannot be ruled out. Compare the stone axes from the Liangzhu culture, excavated from Fuquanshan, Qingpu, Zhejiang province, illustrated by Huang, Gems of Liangzhu Culture, Hong Kong, 1992, p. 64, no. 9 and p. 66, no. 10. Compare also the stone axe of similar tapered form with slightly flared straight sides and similarly drilled with a large aperture from both sides, excavated from the Xuejiagang Neolithic site at Qianshan, Anhui province, dating to approximately 3000 B.C., illustrated by line drawing in the site report, Kaogu xuebao, 1982, No. 3, p. 309, fig. 24:2.

The arduous labor devoted to production of such an impractical thin and unsharpened blade clearly indicates that this axe was not meant for use as a tool, rather it was produced for ritual use by the ruling elite.