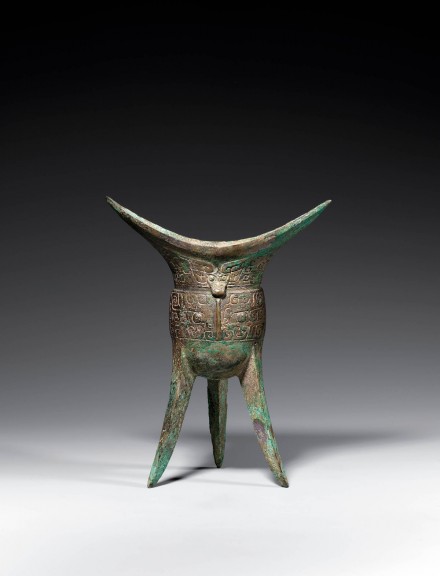 the deep egg-shaped cup raised on three splayed blade-shaped legs, decorated with a broad frieze of two taotie masks dissolved in scroll motifs, each with round protruding eyes, divided on one side by a plain vertical flange surmounted by a horned monster head cast in relief, and on the other side by a vertical panel cast with a pictogram and bridged by a loop handle emerging from a stylized bovine head, the wide mouth of the vessel rising to two high flaring points on opposite sides, cast on the underside with twin blades filled with dragonheads and scroll motifs, and with a plain groove encircling the base of the neck, piercing through the jaw of the relief monster head on one side and continuing under the top of the handle on the other side, the surface with an attractive cuprite red and lightly encrusted malachite green patina, with a trident-shape pictogram cast under the handle, probably a clan sign.

A bronze jiao of very similar profile and similarly decorated with taotie masks and scroll motifs in the Shanghai Museum is illustrated by Chen in Xia Shang Zhou qingtongqi yanjiu: Xia and Shang, xia (Study of Bronzes from the Xia, Shang, and Zhou Dynasties: Xia and Shang, II), Shanghai, 2004, pp. 202-203, no. 98. Another similar bronze jiao also in the collection of the Shanghai Museum, shown in the special exhibition held at Musée Cernuschi in 1998, is illustrated in the exhibition catalogue, Rites et festins de la Chine antique: Bronzes du musée de Shanghai, Paris, 1998, pp. 88-89, no. 18, attributed to the end of Shang to early Western Zhou.  Compare also the bronze jiao of this form, from the Wilhelmina Tenney Memorial Collection and now in the Honolulu Academy of Arts, illustrated in Academy Album: A Pictorial Selection of Works of Art in the Collections, Honolulu, 1968, p. 90, attributed to the 11th century B.C.

Another bronze jiao of very similar form with horned taotie decoration and thick flanges is illustrated by Bagley in Shang Ritual Bronzes in the Arthur M. Sackler Collections, Washington D.C., 1987, pp. 208-214, where the author confirms the 11th century B.C. date by citing an inscribed bronze jiao in the Sumitomo Collection dated to the twentieth reign year of one of the last two Anyang kings, op. cit., fig. 24.6.