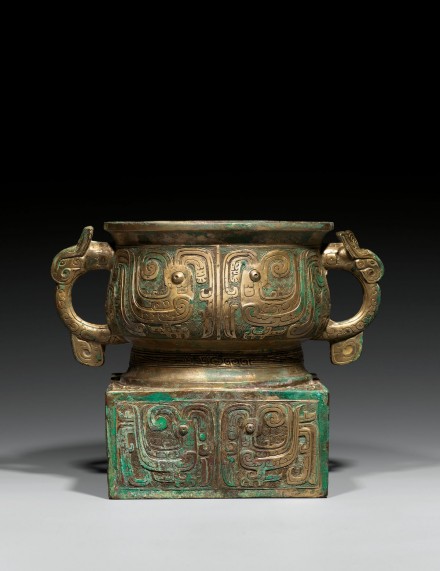 with deep rounded sides finely cast in varied relief with two pairs of addorsed exotic birds shown in silhouette with heads turned over their backs, each with prominent round eye and large hooked beak ending in a tight volute, and with wide flaring tail-feathers filling the frame on either side, all embellished on the surface with intaglio linear scroll motifs detailed with hooks and spurs throughout and reserved on leiwen grounds, the waisted foot of the bowl cast with a narrow running band of ‘classic scroll’ motif,  the tall quadrangular pedestal base decorated with four more matching pairs of addorsed birds, the spandrels on the corners of the upper base filled with confronted pairs of bodiless kui dragons, the wide flaring mouth with galleried rim left undecorated above a pair of tabbed loop handles issuing from monster heads with high curled horns, the surface very well preserved with lightly encrusted areas of bright malachite green corrosion widely scattered over the pale golden-tan lustrous metal, with an inscription of seven characters cast in the center of the interior of the bowl.

The inscription may be read as: Ruigong wei qi gong bao gui (芮公為旂宮寶簋) and may be translated as “Ruigong made this precious gui vessel for the Qi palace.”

Another very similarly decorated bronze gui and cover, inscribed Ruigongshu zuo qi gong bao gui, unearthed in 1980 from a Western Zhou tomb at Zhuangtou village, Huang county, Shandong province, is illustrated in the excavation report in Wenwu, 1986, No. 8, pp. 70-72, where the scholars attributed the tomb to early Western Zhou dynasty.

Compare also the bronze gui excavated in 1961 from a Western Zhou hoard at Zhangjiapo, Chang’an, Shaanxi province, and now in the Shaanxi History Museum, illustrated in Zhongguo qingtongqi quanji: Xi Zhou, I (Compendium of Chinese Bronzes: Western Zhou, I), Vol. 5, Beijing, 1996, p. 57, no. 60, with description and further details on p. 18 and with a rubbing of the long inscription inside the bowl on p. 64. The inscription mentions historical figures and events which indicate that the gui should be dated to the reign of the early Western Zhou King Mu (r. 1001-947 B.C.).

For a comprehensive discussion of this important Zhou dynasty ritual vessel form, see “A Study of the Western Zhou Bronze Gui with a Square Pedestal” by Zhang, Kaogu, 1999, No. 12, pp. 69-76.